This is going to sound a bit weird considering it’s a somewhat far off and we’re still reelling from a couple of weeks of hot days and nights, still going through hot days and crazy thunderstorms but, I’ve been thinking about winter. Or, to be more precise, that I don’t want to be here when it’s minus 35° with the windchill.

(It’s a super long post but please at least skim through it, I’d really appreciate pointers)

It’s been a dream of mine for years; escape the snow and cold for a couple of months. I did it for 3 weeks in Australia in 2001, and two weeks at SXSW and in Mexico this year but that’s not good enough, I want to be out of here for January and February, wouldn’t mind a good chunk of March too.

Why am I thinking about it now? For one thing, I want to go to Croatia and Slovenia, have been saying so for a while now and it’s looking like September. I started thinking about the winter thing because I thought I might get a better idea of costs for that before deciding for September but I’m late in figuring winter out and I think I’ll go anyway, don’t want to skip over that trip and then choke on the winter escape route. For another thing, I’ll need to do some research, might as well start early.

Now, knowing myself and realising that it quite possibly costs more than I’m vaguely imagining, chances are those plans will be scaled down or scratched entirely but lets dream. There are a few possible combinations:

Just in case someone has a great idea and this fits in, I’ll mention that I’m planning (80% sure) on attending SXSW in March, might stop there coming back from somewhere else. (That’s a business expense :-D )

What I’m looking for are ideas of where I could go, what those places offer, costs, etc. I’m even looking for a name for that type of thing so I can look for more info. “Working holiday” is similar and there is some content for that but it’s mostly how to find a job while traveling, I don’t need that, I have my job. “Expat” is also good but that ain’t it either, I’m not looking to move permanently, just a couple of months. Obviously there’s still some info there but I might be missing something just because I don’t know what people call it (except for “you lucky bastard I hate you” which is what I normally use)

I’m actually surprised that you don’t hear more about such things and that I haven’t (yet?) found ressources for it, just amongst the people I know/ read:

What I’m looking for

A few options I have in mind so far

Ok. Thanks to those who’ve read the whole thing. Now, ideas?

Why not Thailand or Vietnam? What are the amenities that you think you won’t find there? Based on my limited knowledge it should be no problem at all to find a comfortable apartment with good broadband. You may want to take a closer look at those places, as cost of living is also likely to be much lower. The only real drawback, I think, is giant bugs.

Hvae you thought about Costa Rica? Jan-Feb is the middle of the dry season. There are not too many tropical countries out there where you can safely drink the water straight out of the faucet.

Maciej: I’ll look into it.

Andre: Fits the vacation bit, any idea on the rest?

Have you thought of Barcelona. It’s on the Mediteranian (so it’s fairly warm thoughout the year, it is an extremely culturally diverse city, it’s considered to be the Montreal of Europe, Siesta!, Miro, Picasso and Gaudi… , gateway to the rest of Europe…. I could go on for ever…

hmm… maybe I should move there.

Yes I have and you’re right, would be an excellent location. The “gateway to Europe” bit might be less interesting in winter though and it’s not quite as warm as I would hope. Still pretty good though and I also checked out Vancouver and it’s colder than I thought I remembered.

By the way, where the hell do they get their numbers to say that it’s -9 and -8 in Montréal that time of year???

and it rains in the winter in Vancouver… a lot!

Oh yeah – Barcelona! I have been there many times and it is still one of my fav cities. It has a beach and offers excellent bars, clubs and restaurants.
I checked for apartments a year ago or so, it was quite expensive, although I only checked for the city center (ie. Raval). And people don’t speak english there, spanish and catalan are the main languages.

I sent you a private email about it.

“Lying is an important and useful skill, and one that allows society to function.” – B & K in conversation in Shimokitazawa, march 2006.

I can vouch for Spain, having spent time in Andalucia in January. Also some of the Caribbean islands can be lived in more affordably than you’d think if approached as a local rather than a tourist (ie not renting the beach front place). Broadband can be an issue down there though.

Also keep in mind perhaps taking language courses where ever you go, as student visas oftentimes come with the right to work temporarily OR they care much less about your continuing to work for your own enterprise back home since you’re obviously there temporarily for a legit purpose.

Yes, Spain is definitely one of the options, including Andalucia (Malaga has been recommended) which would give me a chance to drop by Sevilla and Granada again, see the inside of the Alhambra this time. Taking some spanish classes is an excellent idea.

As a general note, I’ll be looking into the whole work and visa thing, just to make sure everything is in order but I’m also thinking duration must have an effect. I can’t stay in Australia for more than 6 months without paperwork for example but I can’t certainly work there during that time, no problem.

In case someone has additional info, at this time the 3 top choices are (no order):
– New Zealand (Wellington)
– Argentina (Buenos Aires)
– Spain (Barcelona or somewhere in Andalucia) 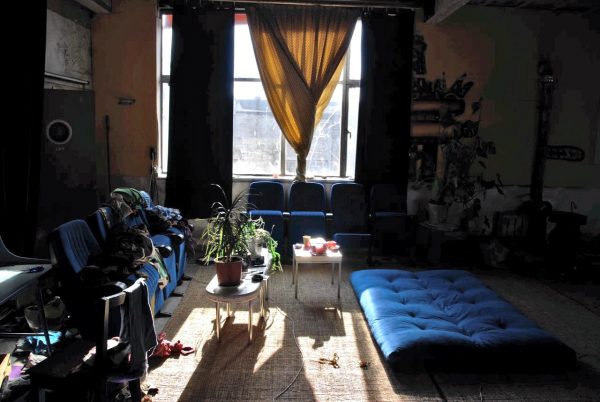 That time we visited a squat in Rotterdam