Yikes! Already one week in Berlin and I haven’t written anything here! I’ve Flickred though and Twittered. I’m not going to write a “real” post, just a series of paragraphs noting things, don’t really feel like weaving the whole thing into a complete text that makes sense ;) 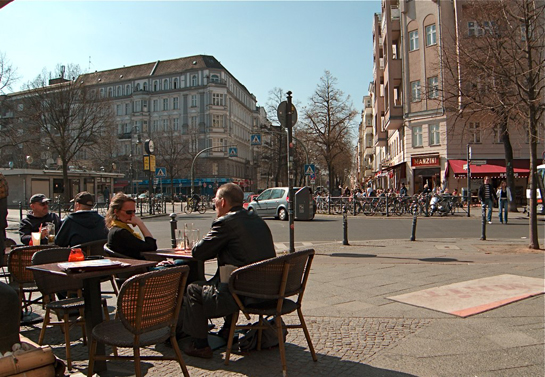 First flight was great, probably the most pleasant Europe flight I’ve had, we were on Air Canada with bulkhead seats so lots of leg room and personal screens with a good lineup of recent movies, went like a snap.

Second flight was Frankfurt Berlin. The Montréal tickets were wrongly printed so we thought we barely had time to make the flight, in the end it was actually 45 minutes later than listed and then 15 minutes late. I thought the Germans were efficient? Then we got there and my backpack didn’t make it, took 2 days to get to us.

Considering how “fun” it can be to enter the US, and the fact we were going for almost three months, our entry was incredibly simple. One passport check in Frankfurt, no questions at all, he just picked it up, leafed through it, didn’t check our plane tickets, destination, duration of stay or anything, just stamped a page and we were off. And it wasn’t even a busy day.

Our apartment, located on the west side of Kreuzberg, is fantastic, super high ceilings, huge rooms, big windows, nice building. The kitchen isn’t all that well equiped but ok. We’re a bit further out from usefull stuff than back home but we’re very lucky where we’re located in Montréal. Five minutes away though there’s a nice little street with a bunch of cafes, restaurants and bars. We found a “bio” market also five minutes away.

The metro kicks ass. Super frequent trains at all times of day we’ve tried so far, stations and trains are clean. We got monthly passes and since there are no gates at the stations, we just walk in and out as we please. Totally painless and useful service.

(Obviously all comments concerning Berlin are based on the parts we’ve seen, there is still lots to see)

Berlin doesn’t look all that great. There are some great old buildings and Potsdamer Platz and the Bundestag area are super clean and well architected but the rest is a bit blah, including the design of stuff. Lots of crappy ugly signage, decrepit facades, etc. Through that there are some beautiful well renovated areas, great wide sidewalks and bike paths everywhere. 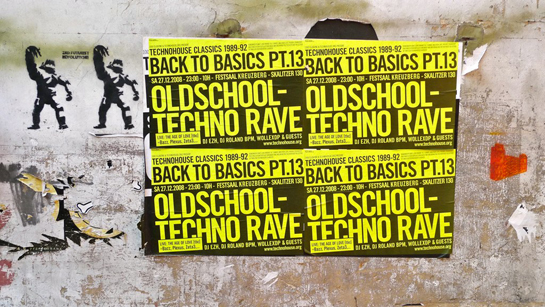 That’s from the purely visual standpoint, from the broader “feeling” standpoint, it’s a bit like Montréal; if you look at the “skin” it’s a bit messed up but the city is alive and vibrant. Seems we got here at the same time as the sun so from the first walk around it’s been sunny with loads of happy people on the street, exactly like on the few nice days we had in Montréal in March but with more people, loads and loads more terrasses and couples and groups laying out in the sun on every spare corner of grass.

Last night (so Tuesday) we walked home from our coworking place at around 6pm and the terrasses were packed, the paths along the canal buzzing with people and hundreds of little get togethers were going on all over the place. 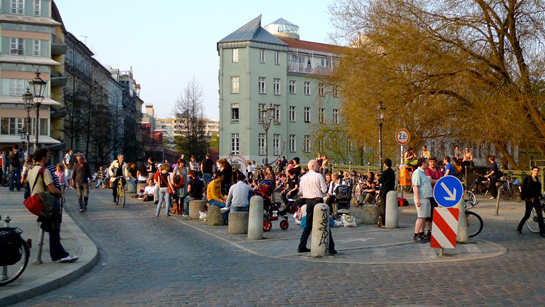 The mythical cheap flight seems to be just that; somewhat of a myth. First off the really über cheap flights seem to be when flying out from London or Amsterdam. Second, just try to get the lowest price. Not only do you then have to double (or more) the price for fuel surcharge, airport taxe, security tax, security of the security tax, etc. but flights advertised at 49€ one way end up costing 275€ return. Trains are much the same, looking for a return ticket Berlin – Munich you see 58€ advertised but for departure after departure and day after day those tickets are all gone and the next type of seat is 118€. Which means that instead of multiple short trips, we might group a few things in one “loop” at the end.

Electronics and phone sales guys are just like ours; incompetent. I’ll write a separate post about my quest for a no contract, internet enabled, decently priced SIM and my completly unlockable iPhone.

It’s cheap. Well, cheap for Europe anyway. So far everything, once converted, is either the same price as in Montréal or, very often, cheaper. That’s one of the reasons we chose Berlin but I’m still surprised. On the first day we got a big indian lunch for 4.5€ each, a couple of days ago we had a 12” wood oven vegeterian pizza with loads of vegies and thin crust, also for 4.5€. Beer is usually under 3€, often around 2€. Cheap.

Our coworking space, located on the east side of Kreuzberg, is cool. Nice little place, kind of in the same design “vibe” as Station C, great paintings, ground floor with a big door that opens to a courtyard and just outside the building is the canal with a bunch of cafes alongside it. We have cool terrasses with loads of “Mile Endish” people literally 30 seconds walk away.

Last three times I’ve been to Europe I was either only in Paris (twice) or in Paris and the Netherlands so I guess my clothing/fashion/design view of Europe has been skewed to the more fashionny end of the spectrum because so far Berlin is more relaxed than I expected. More like Montréal than Paris and I think on the Plateau and in the Mile End we might actually see more super stylishly / interestingly dressed people than where we’ve been so far in Berlin.

Alex and Boris introduced me to locals through email, we already had a great dinner with Peter, Michelle and Rishab and we’re having a geekdinner again Friday with other expats. I might also speak at a techy/open event so things are moving along nicely.

Looks like you guys are having fun! Berlin is very cool, don’t forget to see some of the wonderful museums!

Want to be an entrepreneur? Drop out of college