I was expecting a better designed version of the Pebl, I got a dream device, something I would have laughed off as impossible if seen on a rumor site. This afternoon Steve Jobs dropped a “nukulur” bomb in the cellphone world. Palm is dead and everyone else is maimed and crying for their mom.

The phones we have are Rosie O’Donnell, Apple is giving us Gisele. From a 10 year old Camry to an Audi S4. We were using something less than Windows 3.1 (at best) and we’re jumping to OS X in one keynote. 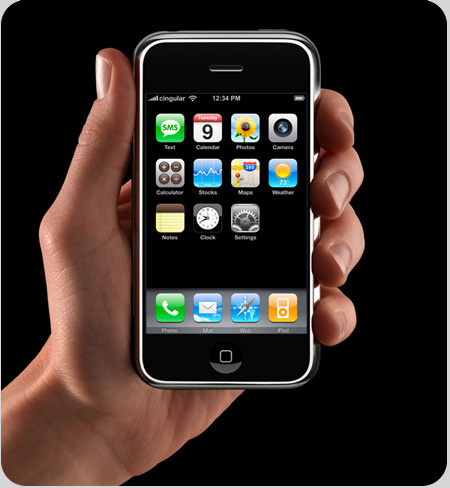 The iPhone is a phone, a widescreen video iPod, a pda, has wifi, bluetooth, 4GB, multitouch input on a large screen, no physical keyboard and looks like it should be displayed in a jewelery store. The interface is beautiful, looks smooth like butter, beautiful, revolutionary and, yes, beautiful. The only place this doesn’t blow all other phones out of the water is with the camera. Everything else makes the competitors look like they need a handcrank to operate. Who still wants a Nokia N series, a crackberry, a sidekick? All handheld devices on the market have just been stoneaged.

Now, Stevo, my man, my buddy, my brothah, where the FAWK is the plan to get this to us in Canada??? Why do you always dis us so?

Video of the Stevenote

Aaron was first to ask about it on chat, then Karl mentioned something along the same lines in the comments (no wonder they’re good friends). Either I’m less interested in that aspect, I’m slower or it already does so much of what I wanted that I was blinded but of course, they’re right, we’ll need to know how to add to it, what’s open, what’s not, what’s possible, etc. Surj Patel on Radar is writing about all that:

For something that may end up in a lot of pockets, the thing that I most want to see for it is a developer program. I want to see people empowered to make mobile applications and widgets that serve major and long tail needs. It would be the chocolate sauce on this ice cream. If you look at the huge third-party accessories market for the iPod then imagine what a software market for this device would be like. From early indicators it looks like OSX desktop widgets or something very similar can be created and distributed by users. We will have to use the OReilly FOO network to verify some of these claims and make sure we get our hands on a handset at some point. I also hope that they make unlocked versions available for sale internationally… One of the reasons that I am hoping for a developer program is that I love is to see people taking things that have one purpose and through their need and ingenuity making them do much more than originally intended. This is part of an interest area of mine dubbed constructionism. The idea in its very basic form is that you should create tools that enable people to create useful things and services for themselves. These services are much better appreciated. —technolust #1 – iPhone just launched

Feeds that are actually supposed to be about Apple: 3

Mentions of the iPhone: 74

I’d say it’s a small cost for having our own country separated from the Republicans ;-)

How long did we wait for the iTMS? Probably a year or two. At least the iPhone v2 will be even cooler.

I’m not sure I can wait that long though, my own cellphone is so old it has Clearnet written on it.

And soon to be announced (maybe next year, to start with predictions ;-) ): you can directly buy and download songs by using the iPhone, in your hotspot, or via EDGE/UMTS/HSDPA Cingular networks. And yes, the iPod will get WiFi as well…

is it hackable?
can you use python or anything else on it?
how they made an embeddable osx?

why does it matter because if it’s really open, it will be the start of Ubiquitous Web computing for the masses? New business for mobile. etc.

but if it’s closed. too bad. just brand fetichism.

There’s one work I didn’t like at all. Patented.

I had that same conversation with Ed last night. ;-) That’s what good about the gasp Palm, the hundreds of third parties applications that make the machine go beyond a calendar and note taking app (for those who care about the PDA aspect). Ed is sure that Apple will keep the machine “closed” to make sure to keep it simple, aside maybe from a few approved widgets. I said they’d be crazy to do that.

And because it’s a phone and we’re in Canada, you can be sure the voice/data plan will be outrageously expensive and out of reach for the non business users.

“And because it’s a phone and we’re in Canada, you can be sure the voice/data plan will be outrageously expensive and out of reach for the non business users.”
Which is why I’m so pleased to see it’s got wifi. Fuck providers, hello free wifi.

I feel like such a dinosaur (in a good way… for me… I think!): I don’t have a cell phone and if you threw a free prepaid one at me I’d run away screaming. I know it’s necessary for a ton of people, but being reached anywhere? No thanks. Having the ability to work absolutely all the time, from anywhere? Are you insane? I’d never have time for anything else! As it is, I pause movies to check my email! It’s bad enough. Every day I get closer to packing up and going deep in the woods to build a shack (where I will need high speed Internet access, yes you can all laugh at me now…). It’s weird. I love gadgets. Just not gadgets that allow anyone to… y’know, talk to me! ;-P I guess it’s lucky/smart that I work from home (where I wouldn’t have a phone if I could help it) and that I can tell myself that my office, and only my office, is an appropriate place for work. I, hmmm, also don’t have to attend meetings, during which, I must say, the ability to multitask would come in handy.

questions:
1- is it carrier locked? we know it has a feature lock-in (visual voicemail -> Cingular only for now, don’t hold your breath for them to share).
2- as Karl said, can softare be installed on it? Can I put my own scripts on it? if not, it will remain a 100% apple-controlled experience.

remember, it is NOT a PDA. it’s a mobile communication and entertaiment device. the question is how much it can be made to communicate and who controls that level. The user or Apple + Carrier. Considering that Apple always designs for the unsophisticated and undemanding (“the market needs us to tell them what they want”), the odds are not good.

also consider:
95% of the (mobile device using) world has learnt how to use the KeyPad (and not the retarded full QWERTY Jobs was rightfully making fun of) to enter text. North Amercians can find it strange all they want but a touchscreen does not provide what is needed for one handed “touch typing with0ut looking” text entry on a mobile device (no tactile response). this is a major hurdle for the adoption of the device. It will be interesting to see what happens. Ignoring anthropological research done world wide was a stupid move.

But hey, they want 1% of the US market in the first year. That means every rich kid in America. Easily done by August. And god knows that small demographic, rich kids, is significant enough elsewhere to give Apple it’s 1% there too. As Karl says, brand/gadget fetish will carry it through. ;)

Return Of The King