Tried out a new place on Mont-Royal last week, Le 940 which replaces the Green Stop that had been closed for a little while. First thought: crappy name. Come on, couldn’t you come up with something just a bit more original than the address?

They certainly have a great space though, super high ceilings, corner spot with tall windows they’ll be opening as soon as it’s warmer out. I’m not good at numbers for floor size but it’s probably one of the biggest places around there and they added a mezanine. It’s also close to a bunch of popular restaurants, the rent must be insane on that place.

Design wise it’s in the vein of the “simple-zen-dark wood-écru leather-plants in big vases-zone-caban” trend I’ve mentioned before (fr) but there’s more color, some of the corner high backed sofa/chairs for one, in dark red and orange. The old wood floor is great, the columns and the side of the mezanine are done up in varnished presswood that look pretty good. Quite a few great light fixtures that probably cost a bundle. In other words, the zen thing but with some warm colors.

Food was good, although of course in one visit by two people it’s not like you can try that many things. The menu is pretty cheap—especially considering how many people were working, very good service—and is the common “Plateau fusion” of funky sandwiches and burgers, pastas and pizzas. They also serve breakfasts and will probably draw some people tired of waiting to get in the neighbouring Avenue. The wine list was very short but it’s not the type of place where you expect a whole lot more. They’ve also got a nice little bar in one of the corners, looking out on Mont-Royal it’s sure to help make them popular.

And that’s pretty much what it will be, a popular place, for a while at least. Nothing new, nothing unique, nothing spectacular but everything done right with all the “in” details and a great spot. With all the windows, it will be enough to make it a hit for the “people watching in the sun” crowd we turn into come spring.

(Btw, the former Porté disparu space accross the street has been rented recently, looking forward to what the new tenants make of it)

We almost ate there on Friday, but then we realized that the menu was super limited… Great place to hang out though, and it’s not too expensive. How long will it last? Just a few months, like so many other businesses on Mont-Royal?

I don’t know. The great amount of space there makes it a good fallback option when all others fill up and you don’t have a reservation. But like every other wanna-be-trendy place on Mont-Royal, the ceiling is high and the acoustics are consequently bad. For a Thursday night it was okay, but on busier nights it might be a problem, something I find annoying about places like Misto or El Dorado.

Good for groups though. And I agree about the name.

Sounds very cool. Do we have a new YULBlog location?? :)

By the way, looks like our apartment is going into that very same taupe-grey-and-wood colour scheme (with a splash of poppy red-orange), so don’t be shocked when you see it…

I went exploring in our neighborhood yesterday – we’re almost right on the canal and below it is the new, slightly hipsterized section of Centre Street in Pointe St-Charles, there’s a very cool resto-pub there and the Eko-Cafe (www.ekocafe.ca) which also has a little organic grocery store attached. I’ll do a more extensive report later…

Shame, though, about Green Spot being gone. It was always a good fall-back for a greasy hangover breakfast.
However, went to La Petite Marche last week for brunch. It’s advisable to not have eaten for a couple days previous before attempting to attack one of their brunch plates. I learned my lesson. 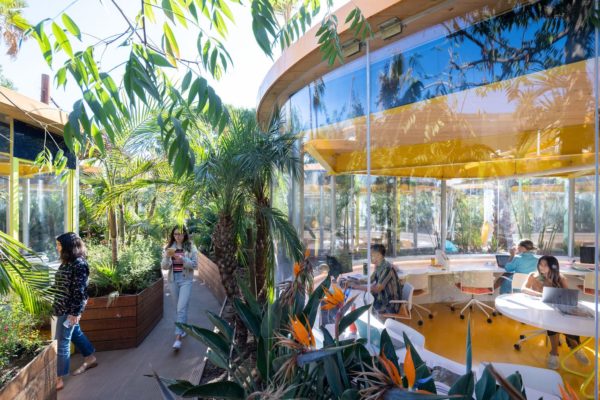 Co-Working in an Urban Forest

US ‘no longer technology king’